Over 100 Years of Liquidation Experience

We’re a family-owned business with more than a century of service and a vast amount of experience, skill and creative innovation passed from generation to generation. Wingate Sales Solutions holds copyrights for traffic building and customer participation events available only to our clients.

Our liquidation team will appraise the inventory, put the right sale plan together and then work with you to execute the plan. Contact us early to start the planning process.

Our mission is to help store owners stimulate business with special promotions or get the most out of their inventory with store closing sales. The Wingate Sales Solutions organization is dedicated to providing effective and cost-efficient asset disposition and retail liquidation services.

Garold is a seasoned leader in the sales promotion and liquidation field. He joined Paul Brooker Sales International in 1963 and served as vice president of for more than 30 years. Garold and his wife, Diane Brooker, renamed the company to Wingate Sales Solutions, Inc. in 1999.

Along with other duties, Mike manages the company’s finances and coordinates company advertising. Mike was employed in retail sales and management and also worked as a Sale Consultant prior to joining the management team in 1997.

Tim prepares the pre-showing advertising for our sales. He was a chain store manager and also managed a wholesale company for several years. Tim worked as a Sale Consultant prior to accepting a management position in 1996.

Dane coordinates and manages Sale Consultants working in the field. He served in the U.S. Air Force and then worked in retail and wholesale sales and store management prior to opening his own store in 1970. Dane joined Wingate Sales Solutions in 1986 as a Sale Consultant and conducted 68 sales before being named Field Operations Director.

Prior to joining the Wingate team, Jon worked for a retail store for several years. He eventually became the owner and operated the business for 21 years before closing it. Jon then became area manager for Dale Carnegie, a Senior Career Adviser for Bernard Haldane and then worked for a large department store chain.

Wingate Sales Solutions was founded as the Brooker Sales Company by C. C. Brooker in 1916. Four generations have been deeply entrenched in the company’s growth and development during its more than 100-year history. C. C. was succeeded by his son, Paul K. Brooker, who ran the business for many years. Paul’s Daughter, Diane, and her husband, Garold, took over from Paul and then changed the company name to Wingate Sales Solutions in 1999. Two of the Wingates’ four sons, Tim and Mike, now occupy management positions after having served in the field as consultants.

Birth of a Business

While C. C. Brooker was working at a department store in 1916, the owner decided to retire and hold a going out of business sale. As store manager, C. C. was in charge of executing the liquidation sale, which was a huge success. Afterward, other store owners asked him to assist with their quitting business and retirement sales. Through this process, C. C. developed a comprehensive store closing sale plan that could be applied to any market, and a retail liquidation business was born.

The Outside Advertiser Program

C. created a customer incentive program he called the Outside Advertiser Program. It had an election theme and the campaigners (customers) accumulated votes to win prizes. In short, the Outside Advertiser Program did everything a store owner needed: Build word-of-mouth advertising, generate foot traffic, encourage repeat purchases and collect on outstanding charge balances.

The program helped the Brooker company produce results no store owner or competitor could match. In fact, it wasn’t unusual for a five- or six-week promotional sale to realize its highest volume on the last day.

During store closing sales, the program helped maintain a high customer count even as the inventory shrank, generated larger purchases per customer and created an incentive for customers to buy slow-turning merchandise.

This was before credit cards, when almost every store carried charge accounts. Collecting these accounts was an important part of cash-raising promotional sales and a necessity for store closing sales. The Outside Advertiser Program encouraged customers to pay with cash rather than charging merchandise and rewarded customers who paid off existing charge accounts.

The Depression and WWII

The Brooker Company experienced rapid growth during the 1920s and was the only liquidation company to survive the Great Depression in the 1930s. C. C.’s son Paul graduated from the University of Kansas and came to work for the company in 1931. 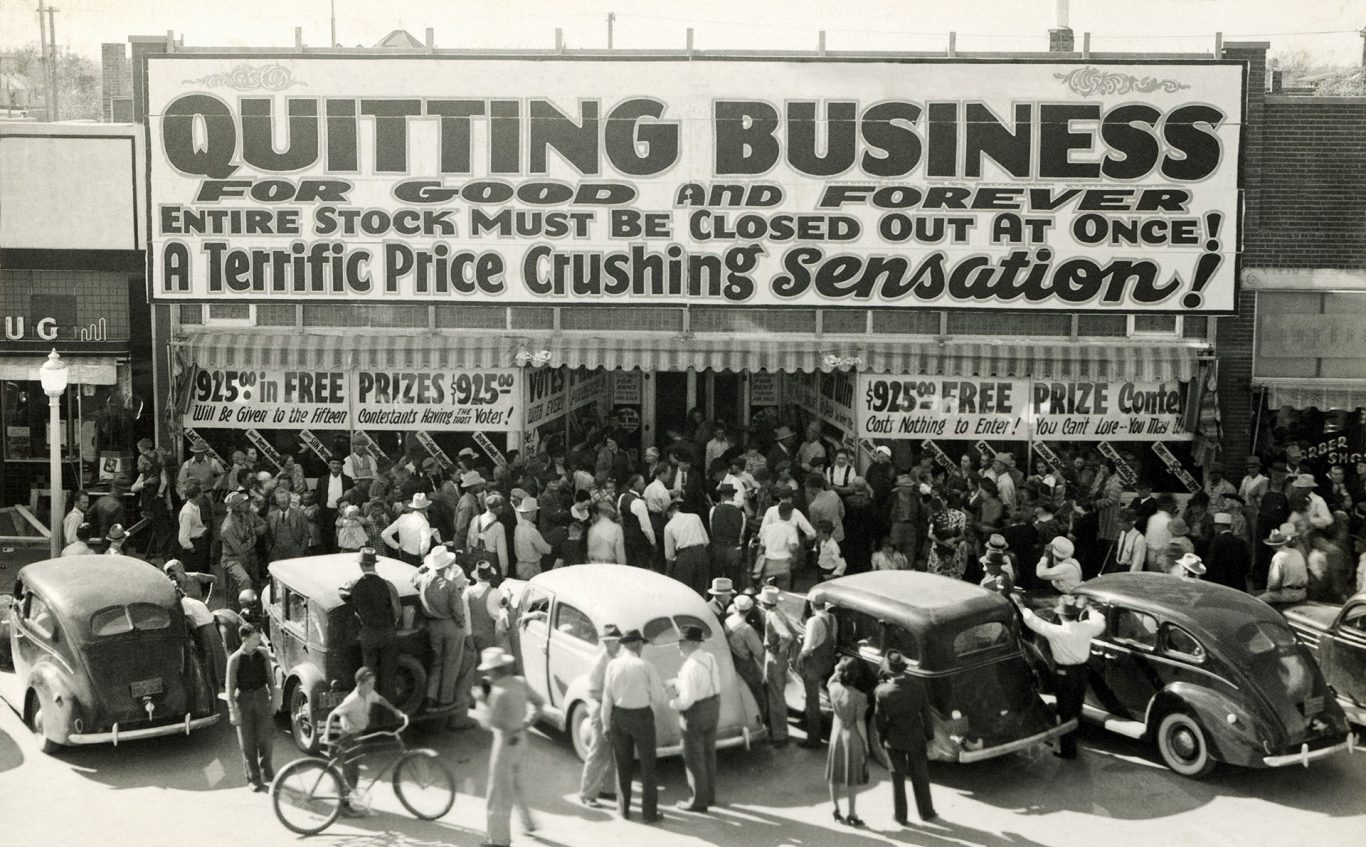 During World War II, store owners had trouble finding merchandise to buy and they didn’t need help selling it, so the Brooker Company ceased operations. After the war, C. C. reorganized the company and started all over again as a small regional organization. Many competitors sprang up around the country at the same time.

C.’s granddaughter, Diane Brooker, married Garold Wingate in 1960 and then Garold started working part-time for the Brooker Company. He joined the company full-time in 1963 and soon became Vice President. Garold organized the company’s expansion into regional sales areas across the United States and then into Canada in 1968. By the mid 1970s, the Brooker Company dominated the retail sales consultant market in North America.

In the late 1970s, the U.S. experienced a period of high interest rates that forced many retail businesses to close. This marked a shift for the Brooker Company from primarily promotional sales to nearly all retirement and going out of business sales.

In 1987, Garold updated and reformatted the Outside Advertiser Program to a simpler game theme based on points and renamed it The Fun Game.